What is the European Heart and Lung Transplant Federation ?

Such was the success of these Games and the recognition that “something special” had been started, that the French Heart Transplant Assocation, under the Chairmanship of Maurice Girod hosted the competition the following year.

In 1991 the Games were hosted by the British Heart Transplant Association at Hayes, Middlesex, just outside London under the Chairmanship of Ken Pinfield and Vice-President Geoffrey Finnigan.

In 1992 Peter Hansen and “Harten Twee” again hosted the Games, this time at the campus of Twente University at Enschede in the Netherlands. By this time the Games had grown to almost 200 competitors from 10 countries and where Jan Ras and Pieter Haak were key contributors.

It was here that the idea of a European Heart Transplant Federation was first discussed with Fernand Magdonelle and Geoffrey Finnigan as principal promoters. A draft proposal for statues for a Federation was presented during a meeting at Brussels in 1993 during 20km Brussels Marathon.

A final version was prepared at Tignes, France in January of 1994 and presented to all National Associations attending the 5th European Games at Helsinki, Finland in 1994 under the Chairmanship of  Esko Laine and Secretary General Ilkka Vass. There the founding protocol was signed on July 3rd 1994 from 15 European National Heart- or Heart-Lung Transplant Associations.

The Federation was registered in Belgium and for many years every second General Assembly was held there and during the years of the Games GA was part of the program.

Geoffrey Finnigan of Great Britain was elected the first President of the Federation.

Current President is Henk Bakker from the Netherlands.

On October 13th 2005 the name was amended to read: European Heart and Lung Transplant Federation (EHLTF). 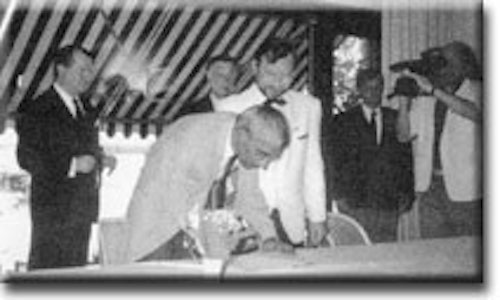 From the signing ceremony:
Henri Denneville, the French representative, signing the founding protocol.

The history of our games

or email us at This email address is being protected from spambots. You need JavaScript enabled to view it.